The lander and the Chang’e 4 probe rover have resumed work for a 29th lunar day on the opposite side of the moon.

The lander woke up at 9:43 p.m. Tuesday (Beijing time), and the rover, Yutu-2 (Jade Rabbit-2), woke up at 3:54 a.m. Tuesday, according to the Exploration Center. China National Lunar and Space Program. Space management.

The Chang’e 4 probe, which switched to idle mode during the lunar night due to a lack of solar power, has survived about 825 Earth days on the moon. A lunar day is equivalent to 14 days on Earth and a lunar night is the same length.

Located northwest of the Chang’e 4 landing site, the rover has traveled 682.8 meters. The linear distance between the rover and the landing site is about 455 meters.

During its 29th lunar day, the rover will continue to move northwest toward the basalt range located about 1.2 km from the rover.

The equipment on board the rover, which includes a panoramic camera, an infrared imaging spectrometer, a neutral atom detector and a lunar radar, will continue to conduct scientific explorations.

The Chang’e 4 probe, launched on December 8, 2018, made the first soft landing in the Von Karman crater in the South Pole-Aitken basin on the opposite side of the moon on January 3, 2019. 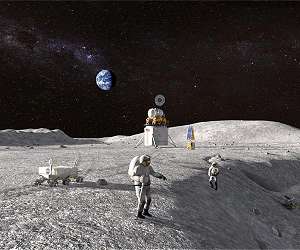 NASA aims to surprise the public with landing images and videos

NASA has begun intensive planning to capture the public’s attention with high-definition video, photos, and possible live streaming from the moon during upcoming Artemis missions. Delayed grainy images, sometimes only black and white, were a hallmark of the first Apollo moon landing in 1969. But even that captured 650 million viewers around the world. Artemis lunar missions will feature footage more akin to the poignant video of the Mars rover Perseverance parachuting … read more