The rocket engine with one of the most historic stories in space flight, the RS-25, returns to space for a second act, this time to send humans on the Artemis missions to explore the moon.

As the main engine of the space shuttle, the RS-25 has a proven track record of launching 135 missions spanning more than three decades. At the end of the shuttle program in 2011, 16 RS-25 engines were in storage that helped build NASA’s International Space Station and deploy the Hubble Space Telescope, among other accomplishments.

When NASA began exploring engines to power America’s next super-heavy-lift rocket, the Space Launch System (SLS), the RS-25 offered the opportunity to forego the costs of developing a new engine and the ability to harness the assets, capabilities and experience of the space shuttle program.

“It is one of the most reliable, efficient and high-performance engines ever built and it was ahead of its time when considering design, engineering and performance,” said Johnny Heflin, manager of the Office of SLS Liquid Engines at the Marshall Center. of NASA Spaceflight. in Huntsville, Alabama. “The fact that this engine has the versatility to launch the SLS is a testament to the professionals who first built it in the ’70s, as well as the incredible people who have continually improved it throughout its 30+ years. years of history “.

However, getting the engine to fly the new mega-rocket was not a matter of “plug and play.” Engineers made several design enhancements to prepare the RS-25 for flight in the most demanding SLS environment.

Engineers adapt the RS-25 for the SLS Rocket
In 2015, when NASA and Aerojet Rocketdyne began retrofitting the legacy engines, one of the first parts they redesigned was the outdated flight controllers. Often referred to as the brain of the engine, due to its role in actively controlling engine operation and managing command and data protocols between the engine and the spacecraft, the RS-25 needed a supercomputer capable of handling modern SLS algorithms. .

Simply changing the engine control systems was not enough to prepare this engine to operate the most powerful rocket ever built. The architecture of the SLS was different from that of its shuttle predecessor, and engineers adapted the RS-25 engine for its new role.

The space shuttle provided three RS-25s with the convenience of traveling further from the solid rocket main thruster during flight, creating less extreme thermal conditions. With the SLS design, four engines are located at the base of the rocket’s center stage, directly next to the two solid rocket boosters. In this scenario, the nozzles of the RS-25 engine acquire extreme base heating, especially during the first two minutes of flight when the booster fuel is burned.

“Those engine nozzles are being exploited by the extreme heat coming out of the two solid rocket boosters,” said Philip Benefield, Engine Systems and Requirements Team Leader. “It is as if the engines fly alongside two giant heat lamps during their ascent.”

The engine nozzles absorb additional heat during amplifier separation as thrusters fire on it to separate the booster from the SLS center stage. This was addressed by adding insulation to the motor nozzle, which Benefield described as one of the key improvements.

Another difference is the result of where the liquid oxygen tank is located in relation to the four RS-25 engines at the base of the rocket’s center stage. As the tallest tank in the 212 foot core stage, this tall column of dense liquid oxygen propellant results in high pressure at the RS-25’s inlets.

“These inlets experience twice the pressure of the shuttle configuration,” Benefield noted. “We had to evaluate whether or not these parts could withstand that type of load, then certify them to operational safety standards. With minimal upgrades, the engine met the certification requirements. It really demonstrates the advanced design and reliability of the engine.”

In April 2019, acceptance testing of the previous space shuttle’s 16 main engines was completed. With enough engines to cover the first four Artemis missions, the recently revived RS-25 can operate at 109% of its operational thrust level, a 5% gain since the end of the shuttle program.

The RS-25 sees a bright future
At the end of the Space Shuttle Program, Aerojet Rocketdyne was no longer producing engines.

“It wasn’t just a matter of making the RS-25 more powerful, we weren’t trying to take something awesome and make it more awesome. We wanted to achieve the same highlights while being significantly less expensive to build.” Heflin commented.

In addition to manufacturing improvements, Aerojet Rocketdyne recently redesigned the engine nozzle cover which will be assembled from four large metal cones, as opposed to the previous design which came in 37 separate pieces.

“That one manufacturing change reduces the cost of the nozzle by more than 20%. Therefore, we are laying the foundation for the future by reducing manufacturing costs and building the same high-performance engine in less time,” concluded Heflin. .

During a recent Green Run test at NASA’s Stennis Space Center near Bay St. Louis, Mississippi, the four RS-25 engines of the Artemis I center stage completed a full-length 8-minute hot fire and produced 1.6 million pounds of thrust, and ready to launch the Artemis I mission. The next time all four engines are fired it will be during the rocket’s first flight to the moon. 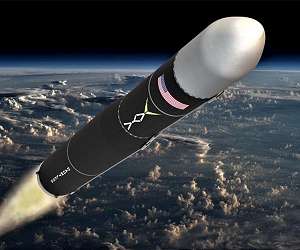 A Florida rocket company, Rocket Crafters, has rebranded itself Vaya Space and is planning a new rocket bigger than it had been looking for, now called Dauntless, according to company president Rob Fabian. Rocket Crafters, now called Oops, is one of many startups chasing new rockets deemed small or medium, and far less powerful than SpaceX’s Falcon 9. Dauntless’s plan is to lift about 2,200 pounds into low Earth orbit, Fabian said. That’s more than twice as powerful as the Intrepid rocket … read more