Lidar imaging technology has made it possible to obtain high-precision 3D images of the target scene in recent years. Single photon imaging lidar is an ideal technology for remote optical imaging with single photon level sensitivity and picosecond resolution, however its image range is strictly limited by the quadratically decreasing count of repeating photons.

To differentiate the weak echo signal from the strong background noise, the team developed a single photon avalanche diode detector (SPAD) with a detection efficiency of 19.3% and a low dark count rate (0.1 kHz). Additionally, the researchers coated the telescope to achieve high transmission at 1550 nm. All of these improvements achieved higher harvesting efficiency than before.

The researchers also adopted an efficient temporal filtering technique for noise suppression. The technique can reduce the total number of noise photon counts to about 0.4 KHz, which is at least 50 times smaller than previous work.

The results of the experiment showed that the system can achieve accurate 3D images up to 201.5 km with single photon sensitivity.

This work could provide improved methods for low-power single-photon LIDAR for high-resolution active imaging and long-range detection and open a new path for the application of long-range target recognition and Earth observation.

University of Science and Technology of China 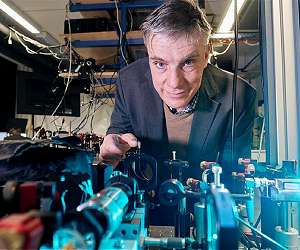 A single “super photon” made up of thousands of individual light particles: About ten years ago, researchers at the University of Bonn produced such an extreme aggregate state for the first time and presented a completely new light source. The state is called the Bose-Einstein optical condensate and has captivated many physicists ever since, because this exotic world of light particles is home to its own physical phenomena. Researchers led by Prof. Dr. Martin Weitz, who discovered the super … read more