A Falcon 9 rocket carrying the spacecraft lifted off as planned at 12:34 pm EDT into a blue April sky with few clouds.

“The weather again looks beautiful, clear skies with an incredible view of Falcon.”

SpaceX recovered the rocket’s first stage booster by landing it on a barge in the Atlantic Ocean. The thruster had been used on six previous missions, including the launch that brought NASA astronauts Bob Behnken and Doug Hurley to the International Space Station in May.

“What an amazing sight of the burning landing from stage one, we got our cameras back just in time for that,” Youmei Zhou, a SpaceX propulsion engineer, said during the broadcast. “And this marks our 79th successful recovery of an orbital-class rocket, and the seventh recovery of this booster.”

The satellites were deployed in their intended orbit just over an hour after launch.

“Shortly, they will deploy their solar array, and over the next few days and weeks, they will distance each other and use their onboard ion thrusters to reach their operational orbit,” Anderson said.

SpaceX has launched more than 1,400 Starlink satellites since the first mission in May 2019.

The company plans to cover the world with high-speed Internet service, available for $ 99 per month after purchasing the hardware. So far the service is available in trial mode for certain areas of North America and the UK.

SpaceX president Gwynne Shotwell said Tuesday during a virtual forum at a satellite conference that the company has no plans to change its pricing plan in the near future or offer different pricing tiers.

The latest information on the commercial satellite industry 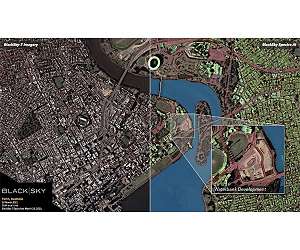 BlackSky has announced that its latest Gen-2 satellite, BlackSky 7, delivered first know-how within 24 hours of launch. Within that time period, BlackSky’s operations team conducted the satellite verification and the satellite collected its first images. At the same time, those images were linked, processed and analyzed using BlackSky’s AI / ML Spectra AI algorithm suite to detect objects of interest and establish the first knowledge milestone. This last satellite was launched at 22:30 UTC, March 22, 202 … read more