As energy and environmental crises become increasingly common around the world, a thermal energy harvester capable of converting abundant thermal energy, such as solar radiation, waste heat, biomass combustion, or geothermal energy, into mechanical energy appears to be promising energy. strategy to mitigate many crises.

“This generator includes two parts: a thermoacoustic motor and a liquid metal-based triboelectric nanogenerator (LM-TENG),” said Guoyao Yu, a professor at the Chinese Academy of Sciences’ Technical Institute of Physics and Chemistry.

By heating the heat exchanger of the thermoacoustic engine, “the gas in the engine starts a spontaneous oscillation,” Yu said. “The oscillatory motion of the gas pushes a column of liquid metal flowing back and forth inside a U-shaped tube. This causes the liquid metal to periodically submerge and separate with a polyimide film, generating an alternating voltage across electrodes. This draws electrical energy from the TA-LM-TENG. “

The most desirable feature of a TA-LM-TENG is the lack of solid moving parts that can break, which will ensure that the nanogenerator is more reliable and help it achieve a longer service life.

“This generator also promises a theoretically high heat-to-electricity conversion efficiency,” Yu said. “And we designed and built a conceptual prototype to validate the feasibility of our concept. In preliminary experiments, the highest open circuit voltage amplitude of 15 volts was achieved, implying that our concept has been well demonstrated.”

As long as the proposed thermal power nanogenerator can be reduced in size, “it shows potential for applications such as waste heat recovery, power supply within (microelectromechanical systems), solar power and space power systems,” Yu said.

Powering the world in the 21st century at Energy-Daily.com 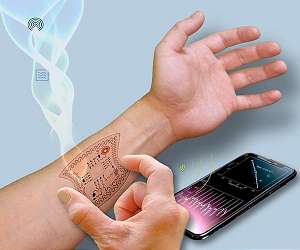 From microwave ovens to Wi-Fi connections, the radio waves that permeate the environment are not only signals of consumed energy, but are also sources of energy themselves. An international team of researchers, led by Huanyu “Larry” Cheng, Dorothy Quiggle Career Development Professor in Penn State’s Department of Engineering, Science, and Mechanics, has developed a way to harvest radio wave energy to power wearable devices. The researchers recently published their method in Materials Today Ph … read more