Using data from NASA’s Spitzer Space Telescope, scientists have identified the three fastest spinning brown dwarfs ever found. More massive than most planets, but not heavy enough to light up like stars, brown dwarfs are cosmic intermediates. And while they are not as well known as stars and planets to most people, they are believed to number in the billions in our galaxy.

In a study appearing in the Astronomical Journal, the team that made the new speed measurements argue that these three fast rotators could be approaching a turning speed limit for all brown dwarfs, beyond which they would break. Fast-spinning brown dwarfs are roughly the same diameter as Jupiter but 40 to 70 times more massive.

Each one spins roughly once an hour, while the next fastest known brown dwarfs spin roughly once every 1.4 hours and Jupiter spins once every 10 hours. Based on its size, that means the largest of the three brown dwarfs spins at more than 60 miles per second (100 kilometers per second), or around 220,000 miles per hour (360,000 kilometers per hour).

Velocity measurements were made using data from Spitzer, which NASA retired in January 2020 (brown dwarfs were discovered by the Two Micron All Sky Survey, or 2MASS, which ran until 2001). The team later corroborated their unusual findings. through observations with the Gemini North and Magellan ground-based telescopes.

Brown dwarfs, like stars or planets, are already spinning when they form. As they cool and contract, they spin faster, like when a spinning ice skater brings her arms closer to her body. Scientists have measured the spin speeds of about 80 brown dwarfs, ranging from less than two hours (including the three new entries) to tens of hours.

With so much variety between the speeds of brown dwarfs already measured, it came as a surprise to the authors of the new study that the three fastest brown dwarfs ever found have almost exactly the same spin speed (about one full rotation per hour) with each other. This cannot be attributed to the brown dwarfs having formed together or at the same stage of their development, because they are physically different: one is a warm brown dwarf, one is cold, and the other falls between them. Since brown dwarfs cool as they age, differences in temperature suggest that these brown dwarfs are of different ages.

The authors do not attribute this to a coincidence. They believe the members of the speedy trio have reached a turning speed limit, beyond which a brown dwarf could break.

All rotating objects generate centripetal force, which increases the faster the object rotates. On a carnival ride, this force can threaten to throw passengers out of their seats; in stars and planets, it can destroy the object. Before a rotating object breaks, it will often begin to bulge around its midsection as it deforms under pressure.

Scientists call this oblation. Saturn, which rotates once every 10 hours like Jupiter, has a noticeable oblation. Based on known characteristics of brown dwarfs, they are likely to have similar degrees of oblation, according to the article’s authors.

Reaching the speed limit
Considering that brown dwarfs tend to speed up as they age, do these objects regularly exceed their turning speed limit and break? In other rotating cosmic objects, such as stars, there are natural braking mechanisms that prevent them from destroying themselves. It is not yet clear whether similar mechanisms exist in brown dwarfs.

“It would be quite spectacular to find a brown dwarf spinning so fast that it launches its atmosphere into space,” said Megan Tannock, Ph.D. candidate from Western University in London, Ontario, and lead author of the new study. “But so far, we haven’t found such a thing. I think that must mean that something is holding the brown dwarfs back before they get to that extreme or that they can’t do it that fast in the first place. Our paper’s output admits of some kind. cap on the turnover rate, but we’re still not sure why. “

The maximum speed of rotation of any object is determined not only by its total mass, but also by how that mass is distributed. That’s why, when it comes to very fast spin speeds, understanding the interior structure of a brown dwarf becomes increasingly important – the material inside is likely to move and warp in ways that could change how fast. with which the object can rotate. Like gaseous planets like Jupiter and Saturn, brown dwarfs are made up mostly of hydrogen and helium.

But they are also significantly denser than most giant planets. Scientists think that the hydrogen in the core of a brown dwarf is under such tremendous pressures that it begins to behave like a metal rather than an inert gas – it has free-floating conducting electrons, like a copper conductor. That changes the way heat is conducted through the interior and, with very fast spin speeds, it can also affect the way mass is distributed within an astronomical object.

“This state of hydrogen, or any gas under such extreme pressure, remains very enigmatic,” said Stanimir Metchev, a co-author of the paper and Canadian president of research on extrasolar planets at the Institute for Earth and Space Exploration of the United States. Western University. “It is extremely challenging to reproduce this state of matter even in the most advanced high-pressure physics laboratories.”

Physicists use observations, laboratory data and mathematics to create models of what the interiors of brown dwarfs should look like and how they should behave, even under extreme conditions. But current models show that the brown dwarf’s maximum spin speed should be between 50% and 80% faster than the one-hour rotation period described in the new study.

“These theories may not have the full picture yet,” Metchev said. “Some unappreciated factor may be coming into play that is not allowing the brown dwarf to spin faster.” Additional observations and theoretical work may still reveal if there is any braking mechanism that prevents brown dwarfs from self-destructing and if there are brown dwarfs that spin even faster in the dark. 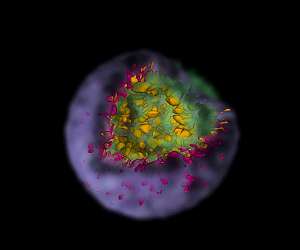 Astronomers are now in a better position to interpret observations of supernova remnants thanks to computer simulations of these cataclysmic events by RIKEN1 astrophysicists. When certain types of stars die, they go out in a blaze of glory, an incredibly powerful explosion known as a supernova. One of the most common forms of supernovae, Type Ia, begins with a dense white dwarf star that has burned its hydrogen fuel. Flowing matter from a companion star can drive a runaway nuclear fusion reaction … read more